The Birmingham Big Art Project invited artists to submit their designs for a new public artwork in Birmingham. Eastside Projects, responsible for curating the project, worked closely with a selection panel of experts in the field of contemporary and public art to select the winner. 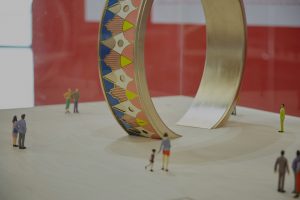 Brian Griffiths’ public artwork is a sculpture that can be worn by the city of Birmingham and its people. He proposes to work with a select group of craftspeople from the Jewellery Quarter to produce a series of bespoke pieces of jewellery which will be made available to the public, as well as being translated onto Eastside City Park as a giant glorious sculpture.

Brian Griffiths, born in 1968 in Stratford-upon-Avon, lives and works in London. Since the late 1990s Griffiths has been making sculptures that value narrative and overblown theatricality through the use of everyday objects. He has had important solo exhibitions at BALTIC Centre for Contemporary Art, Gateshead (2015); Tramway, Glasgow (2014); Galeria Luisa Strina, São Paulo (2012) and Arnolfini, Bristol (2004). His work has also been shown as part of British Art Show 7, Hayward Touring Exhibition (2011); ‘Nothing is Impossible’, The Mattress Factory Museum, Pittsburgh (2010) and Lustwarande 08 Wanderland, Fundament Foundation, Tilburg (2008). 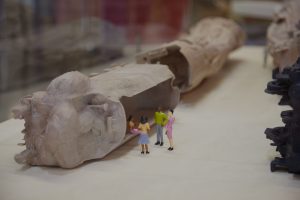 Roger Hiorns proposes a landscape of transformed engines both large and small. The steam train engine in the Think Tank collection is 3D scanned, transformed and modeled in stone. The train’s exterior shell is rendered to resemble human skin and is set amongst a scattered collection of stone car engines. Hiorns further proposes a third form of a full-size 27 metre-long locomotive train. The image of the locomotive in bodily transition is proposed by the artist as a symbol of the shaping of our sexual and physical identities by technology.

Roger Hiorns, born in 1975 in Birmingham, lives and works in London. Hiorns combines materials to transform objects and urban situations. Hiorns has had major solo exhibitions in the UK and abroad including The Rudolfinum, Prague, (2015); The Hepworth Wakefield, Wakefield, (2013); MIMA, Middlesbrough (2012); Aspen Art Museum, Aspen (2010); The Art Institute of Chicago, Chicago (2010); Tate Britain, London (2010); Camden Arts Centre, London (2007) and UCLA Hammer Museum, Los Angeles (2003). In 2009 he was nominated for the Turner Prize with his installation ‘Seizure’, his most ambitious work to date, commissioned by Artangel.

Roger Hiorns:
As yet untitled 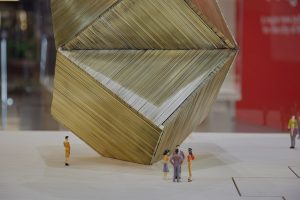 Heather and Ivan Morison, born in 1973 in Desborough and in 1974 in Istanbul respectively, live and work in Herefordshire. The artists often make works for public spaces. Integral to their art practice is an active engagement with storytelling, histories, sites, materials and processes. Their work has been exhibited widely in the UK and internationally including at the Whitechapel Gallery, London (2013); Museum of Contemporary Art Sydney (2013); Tate Modern, London (2012); The Vancouver Art Gallery, Vancouver (2010); The Barbican, London (2009); South London Gallery, London (2005); Tate Britain, London (2004); and the 52nd Venice Biennale where they represented Wales.

‘Blueprint for Happiness’ is derived from the perfect colliding cuboid geometries of minerals created deep beneath the earth. Its intricate gleaming facets represent a realignment of the many layers of Birmingham’s long history into a new geometry for the future. It is a sculpture that holds within it the pure potentiality of an entire city and a metaphor for the radical free thinking that made Birmingham. It is a statement of intent for a city of the future, in a world where the only constant is change. 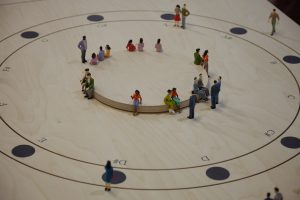 Susan Philipsz’s proposal is an aural clock. The clock will stand as a monument to time: past, present and future. It will comprise of twelve digits like any clock but each of the digits will represent a tone from the twelve tones of the musical scales. The sounds of ‘Station Clock’ will be made by the population of Birmingham and be produced in collaboration with the Birmingham Conservatoire. The tones will sound very low overnight and will be fuller sounding during the day, culminating in a large chorus at noon. For this 1:25 scale version the clock will sound every five minutes instead of every hour.

Susan Philipsz, born in 1965 in Glasgow, lives and works in Berlin. Over the past two decades, she has explored the psychological and sculptural potential of sound. Since the mid-1990s her sound installations have been exhibited at many prestigious institutions around the world including Kunsthaus Bregenz, Austria (2016); Tate Britain, Duveen Galleries, London (2015); Hamburger Bahnhof, Berlin (2014); The Carnegie Museum of Art, Pittsburgh (2013); Museum of Contemporary Art, Chicago (2011); Museum Ludwig in Cologne, Germany (2009) among others. Philipsz was the recipient of the 2010 Turner Prize and in 2012 she debuted a major work at dOCUMENTA 13.

Keith Wilson proposes a slow moving public sculpture that will travel from one end of Eastside City Park to the other over the next ten years. Birmingham’s history of labour and the transportation of materials is here reinvented as a post-industrial ‘art’ quadriga for the carrying of culture. The pair of wavy lines on its sides is derived from the tactile sign for ‘art’, a brainwave marking a culturally shared history of invention. The lines echo Egyptian entrance markers that were carved in relief to represent water, land and sky.

Keith Wilson, born in 1965 in Birmingham, lives and works in New York. Wilson is best known for his playful sculptural interventions and assemblages imbued with a domestic or industrial resonance. Wilson has had major solo exhibitions at the Wellcome Collection, London (2010); Milton Keynes Gallery, (2004); Compton Verney, Warwickshire (2003); Milch Gallery, London (2001); Harris Museum & Art Gallery, Preston (1999); and Camden Arts Centre, London (1995). Over the past two decades he has contributed to numerous group shows and projects, including the Hayward Project Space, London; Institute of Contemporary Arts, London and the Henry Moore Institute, Leeds, and received numerous commissions internationally.